We use cookies on our website. They help us get to know you a little and how you use our website. This helps us provide a more valuable and tailored experience for you and others.

You can revoke cookies at anytime at the bottom of the page.

Wednesday, October 26, 2016 — LOS ANGELES, Calif., October 26, 2016 – Vesuvian Media Group today announced the release of “Mister Sam Shearon’s Creepy Christmas: A Merry Macabre Coloring Book” exclusively on Amazon.com for a limited time. This festive feast of fear, containing 40 original hand-drawn and inked illustrations, is the utmost guide to a variety of creepy and unnerving creatures stemming from traditional beliefs and legends from around the world. Each fearsome and festive colorable page is accompanied by a poem to bring characters to life such as Krampus, Grýla, Santa Claws, Rabid Rudolph, the Grimace Tree, the Wendigo, the Snow Bear, the Yule Cat, the Abominable Snowman, and many more.

The coloring book is the creation of Sam Shearon, also known as “Mister-Sam”. He is a British, dark-artist specializing in horror and science-fiction. His artwork can be found on a variety of books and comic covers, including illustrations for the “Angel series,” “30 Days of Night,” “The X-Files,” “KISS,” “Mars Attacks,” “Judge Dredd,” “Aleister Arcane,” “Richard Matheson: Master of Horror,” the fully illustrated “H.P. Lovecraft‘s The Call of Cthulhu,” “Marvel Illustrated: The Picture of Dorian Gray,” and Clive Barker’s “Hellraiser,” and “Books of Blood”. He has also created illustrations for artists and bands such as: Jason Charles Miller, Rammstein, Rob Zombie, Biohazard, Fear Factory, Powerman 5000, HIM, American Head Charge, and A Pale Horse Named Death.

“Delving deep into the snowy history of winter folklore, I've found that this season is indeed much darker than autumn and ultimately... more sinister than Halloween,” said Sam Shearon. “I hope that through my illustrations and poems, readers will feel and discover the ancient Christmas magic that once brought people together around the fire to tell stories of monsters, spirits and woodland creatures to be wary of, in winter, the season of death.”

MORE INFO ABOUT MISTER SAM SHEARON’S CREEPY CHRISTMAS
The happiest time of the year is also the creepiest. Winter has an even darker and richer lore than Halloween. For centuries, people have feared creatures from ancient legends born of this time of year. Tales such as giant hairy monsters who live in the mountains and will snatch you up and eat you were used to ensure children didn't wander off in the snow and become lost. These were indeed just stories … or were they?

“Mister Sam Shearon’s Creepy Christmas: A Merry Macabre Coloring Book” will also be available in person at Stan Lee's Los Angeles Comic-Con October 28th through 30th. Sam will be making appearances at the Squid Black Entertainment with Vesuvian Media booth (ET17) to sign copies of the coloring book as well as visit with fans. For more information on Sam Shearon, please visit http://www.mister-sam.com/. 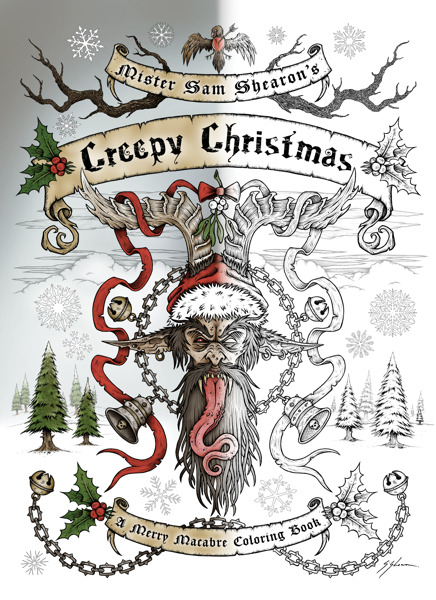